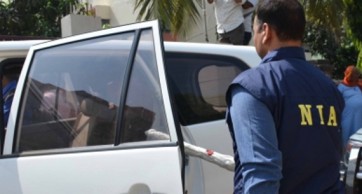 Hyderabad, June 23 (IANS) The National Investigation Agency (NIA) on Thursday detained a Telangana High Court lawyer in Hyderabad in connection with the alleged kidnapping of a nursing student.

The NIA officials detained Shilpa after conducting searches at Chilukanagar in Uppal area.

She was shifted to NIA's regional office in Hyderabad, where the agency officials were questioning her.

A First Information Report (FIR) was registered against Shilpa and others by the NIA recently on the basis of case registered earlier by Visakhapatnam police on a complaint by mother of nursing student Radha.

Radha went missing four years ago and her mother Pallepati Pochamma alleged that leaders of Chaitanya Mahila Sangham (CMS) kidnapped her and forcibly recruited her in Communist Party of India (Maoist).

Her mother alleged that CMS leaders Devendra, Swapna, Shilpa and others had come to their residence and taken Radha with them saying they need her services for treatment.

The complainant alleged that Radha did not return home and later she came to know her daughter had joined the Maoist party and was working with the top brass in the forest area of Peddabayalu in Visakhapatnam district.

The NIA also conducted searches at Chegunta in Medak district of Telangana on Thursday. The officials carried out searches at the house of a son of top Maoist leader Dubashi Shankar, who was arrested by Odisha police in September last year.

The NIA on June 3 registered a FIR on the basis of the case registered by Peddabayulu police. The case has been registered under kidnapping, wrongful confinement and criminal conspiracy.

Meanwhile, lawyer Shilpa's family condemned the NIA searches and her detention without notice. They said she had quit CMS long ago and alleged that the case was fake and part of a conspiracy to harass her.

They said since Shilpa had been fighting cases and raising voice on behalf of Scheduled Castes, Scheduled Tribes, Backward Classes and minorities, she was being targeted.

Shilpa's husband Bandi Kiran said she was implicated in similar false cases in the past and she had to spend seven months in jail.