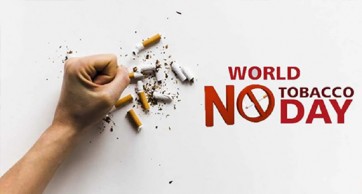 Hyderabad, May 31 (IANS) A 15-year-old boy recently watched 'KGF: Chapter 2' movie thrice, and under heavy influence of its lead character 'Rocky Bhai', the boy smoked a packet of cigarettes, and fell severely sick, only to be rushed to a hospital for medical attention.

Timely treatment ensured this boy was brought out of immediate danger; but there are many less privileged children who under the influence of cinema take to smoking tobacco, and develop significant health risks, say doctors.

On the occasion of the World No Tobacco Day, the doctors underlined the need to enhance awareness on the ill-effects of smoking and chewing tobacco, and even consuming alcohol, especially among youngsters and women.

Commenting on reasons for youngsters to take to smoking, Dr Ramaah Vaaghmare, Consultant Oncologist, Amor Hospitals said: "Cinema has a big influence on people, especially on the youth, who try to ape the demigod characters from the movies they watch. Glorifying smoking on the silver screen and posting a small and insignificant statutory warning in a corner of the screen, will do no good. There are many actors who smoke in their real lives, and fans who follow these stars' personal lives take inspiration from their regular lifestyles too. Hence, it is important that cinema and those associated with it do not glamorise smoking tobacco in any form, on or off the screen."

"Cigarette smoking has been on the rise over the past few decades in India. Though the rate of increase appears to have slowed down in recent years, it is still at alarming levels, more so among the women. If cigarette smoking continues at this rate among the youth, we might witness a rise in the number of heart disease patients, cancer patients, and even premature mortality, causing a form of healthcare emergency in the country," said Nagendra Parvataneni, Senior Consultant and Head of the Department Surgical Oncology, KIMS Hospitals.

Dr Sudhir Prasad, Consultant Pulmonologist, Aware Gleneagles Global Hospital pointed out that three prominent film actors, each with a huge fan base, have come together to promote a particular brand.

"Though the claim is that they are only promoting flavoured cardamom, the fact remains something else. That advertisement is a surrogate means to promote 'pan masala' or a form of chewable tobacco with the same brand name. It is highly unfortunate that these so-called superstars of Indian cinema endorse such harmful products for the sake of money," he said.

Adolescents are most vulnerable to initiate use of tobacco. It is an established fact now that many adult smokers would have smoked for the first time ever while still in high school or just after entering a college. Hence it is the duty of the society in general and of the parents to ensure teenagers do not find inspiration to smoking. When a father or any other elder in a family smokes tobacco, there is a high probability of a youngster from the house taking to smoking for the sake of fun. It is important we deglamorise smoking to possible extent and ensure we do not drive the future of this society in the wrong direction, he added.