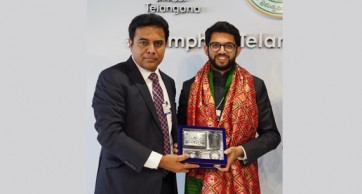 The meetings took place on the sidelines of the annual meeting of the World Economic Forum (WEF) in Davos.

Andhra Pradesh chief minister and ministers from Telangana and Maharashtra are leading their respective state delegations at the WEF meeting.

"Had a great meeting with my brother AP CM YS @ysjagan garu," tweeted KTR, as the Telangana minister is popularly known.

KTR also shared a couple of pictures with Jagan Mohan Reddy. Both the leaders are seen sharing a light moment.

This was the first meeting between the two leaders after KTR's controversial remarks about the basic amenities in Andhra Pradesh, which had evoked strong reaction from several ministers from the neighbouring state.

Last month while addressing a property show of the Confederation of Real Estate Developers' Associations of India (CREDAI) in Hyderabad, KTR had made the remark that there is no electricity, drinking water in Andhra Pradesh while the roads are in bad shape.

While highlighting how the basic infrastructure has significantly improved in Hyderabad over the last seven years, KTR had said people appreciate the value of this when they visit other states.

He said his friend, who went to a neighbouring state to celebrate Sankranti at his native place, shared with him his experience during the stay.

Several ministers from Andhra Pradesh had condemned KTR's remarks and demanded him to withdraw the same.

The Telangana minister had later said that his remarks were not meant to hurt anyone.

"It appears that an innocuous comment that I had made at a meeting may have caused some unintentional pain to my friends in Andhra Pradesh," he had tweeted.

"I enjoy a great brotherly equation with AP CM Jagan Garu & wish that the state prospers under his leadership," he wrote.

"Discussed wide range of issues on how Telangana & Maharashtra can work together. Stronger the states, stronger the country," he wrote.