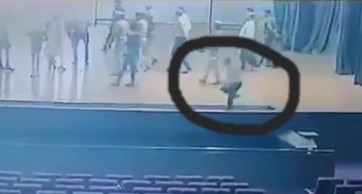 Hyderabad, May 19 (IANS) An official of the Intelligence Bureau (IB) died after an accidental fall at an auditorium in Hyderabad while reviewing the security arrangements for Vice President M. Venkaiah Naidu's visit.

Assistant director of IB, Kumar Amresh (51) fell into an open area underneath the stage while taking photographs of Shilpa Kalavedika in Hitec City under the limits of Madhapur police station on Wednesday.

Kumar, who sustained internal head injuries, was shifted to a hospital where he died.

The accident occurred when a team of officials from the IB and Intelligence Security Wing (ISW) of the Telangana Police were reviewing the security at the stadium where Vice President Venkaiah Naidu is scheduled to attend an event on Friday.

A video of the incident went viral on social media. The official is seen apparently taking photographs of the auditorium on his mobile phone while moving on the dais. He did not realise that he had reached the edge of the stage and fell into the 12-feet deep open area which is used for installation of sound and equipment and for seating the technical staff.

Other members of the team rushed to the rescue of Kumar, a native of Bihar. He, however, was unresponsive due to internal head injuries. He was shifted to hospital, where he died.