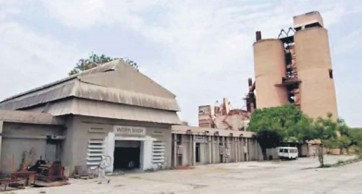 Hyderabad, May 17 (IANS) Telangana's Industry Minister K.T. Rama Rao on Tuesday appealed to the Centre to revive the Cement Corporation of India (CCI) unit in Adilabad even as the Centre has initiated steps to auction its assets.

He assured the Centre that the state government will extend all support and provide needed fiscal incentives to ensure thousands of youth from Adilabad are gainfully employed.

The state government and KTR, as the state minister is popularly known, made several requests to the Centre in the past for revival of the unit, which was shut in 2008.

The latest appeal came in response to reports that the Centre is auctioning CII machinery as scrap. It has also called for tenders for valuation of CCI land and buildings. This has belied all hopes of revival of the unit and workers see this as the final move to privatise the unit.

In January, KTR had urged the Centre to reopen the unit saying there are a lot of favourable conditions and opportunities for the unit now.

Minister KTR wrote that 772 acres of land is available for the unit. An additional 170 acres for CCI township and 1,500 acres for 48 million tonnes of limestone deposits are available.

Stating that there was enough water and 2 KV electricity supply readily available for the unit, KTR said that reopening of CCI will not just help Telangana but also neighbouring states like Maharashtra. He had said reopening of CCI will help develop Adilabad in a big way, mainly new jobs will be created for the local youth.

As the construction sector witnessed a boom and cement companies making profits, the state government felt that the conditions were favourable for reopening the unit.

The unit was closed in 2008 due to losses, rendering 5,000 workers jobless. After formation of Telangana state in 2014, the state government had been requesting the Centre to reopen the unit as this would provide employment to locals in the region, which has a large number of tribals. Chief Minister K. Chandrasekhar Rao had also raised the issue with Prime Minister Narendra Modi.