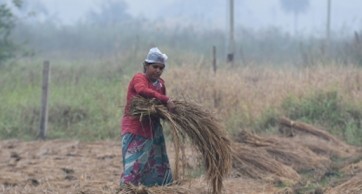 Hyderabad, May 16 (IANS) Farmers in parts of Telangana suffered heavy crop losses due to unseasonal rain on Sunday night. Paddy ready to be harvested and also the produce kept near procurement centres suffered huge damage due to the heavy rains accompanied by strong winds in Nizamabad, Kamareddy, Karimnagar, Jagtial, Rajanna Sircilla, Medak, Nirmal and other districts.

In some places, farmers staged protests on Monday, demanding that the state government compensate them for the losses.

They alleged that the delay by the authorities in procuring paddy led to losses. The produce stored in the open near the procurement centres was either washed away or soaked in rain water.

In Kamareddy, Rajanna Sircilla and Karimnagar districts the farmers staged a sit-in or resorted to road blockades in support of their demand.

A group of farmers sat on the Nizamabad-Armoor highway. They demanded that the district collector come there and give them an assurance to pay compensation.

Congress leader and member of the Legislative Council Jeevan Reddy called on the affected farmers in Jagtial district and urged the state government to come to their rescue.

In Rajanna Sircilla district, BJP leaders met the affected farmers and extended support to their protest.

The unseasonal rains came as another blow to the paddy farmers as they were already worried over the delay due to the stand-off between the state and the central governments.

As the Centre refused to procure paddy despite the protest by the ruling Telangana Rashtra Samithi (TRS), the state government last month came forward to procure the same from farmers.

Meanwhile, Kisan Congress leaders staged a protest at the civil supplies office in Hyderabad over alleged irregularities and also delay in paddy procurement.

The leaders led by Anvesh Reddy staged the protest in the office. They alleged that rice millers and officials were exploiting farmers.

Anvesh Reddy and others refused to leave till civil supplies commissioner Anil Kumar came to hear them. As they continued the protest raising anti-government slogans, police arrested them. The police personnel physically lifted the protesters and shifted them to a police station.