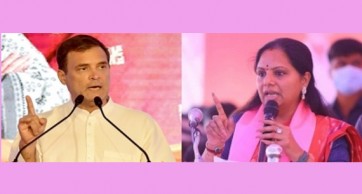 Hyderabad, May 6 (IANS) Telangana Rashtra Samithi (TRS) leader K. Kavitha on Friday asked Congress leader Rahul Gandhi as to how many times he raised the issues of Telangana in Parliament.

With Rahul Gandhi set to arrive in Hyderabad later in the day on a two-day visit to the state, Kavitha took to Twitter to pose some questions to him.

"As Shri Rahul Gandhi Ji arrives in Telangana today, I sincerely request him to introspect on the following. How many times have you raised the issues of Telangana in Parliament," she asked.

Kavitha, who is daughter of Chief Minister K. Chandrasekhar Rao, also wanted to know why was the Congress party silent while TRS party was fighting with the Union government over the uniform paddy procurement policy, national status for irrigation projects, discrimination in establishing educational institutions, releasing of pending GSTs and grants etc.

Kavitha, a member of Telangana Legislative Council, also told Rahul that Telangana has shown the path of comprehensive development to the nation, by introducing various schemes like Rythu Bandhu, Rythu Bheema, Kalyan Lakshmi, Aarogya Lakshmi, Aasara and many more that 'continue to benefit our people every day.'

"As many as 11 states are emulating KCR schemes, you are welcome to learn and understand from our state as well," she added.