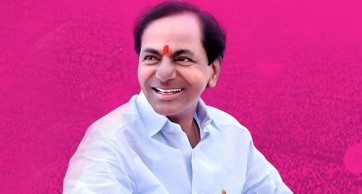 In his inaugural address at the plenary organised to mark 21st foundation day celebrations of TRS, KCR spoke about the need for an alternative political force which can take India ahead on the path of progress by making use of its full potential.

Highlighting the successful Telangana model, he claimed that TRS has the ability to replicate this success at the national level.

The Chief Minister said that TRS will play its role in influencing national politics and bringing about a change.

Amid loud slogans of 'Desh Ka Neta KCR' by 3,000 delegates at the Hyderabad International Convention Centre (HICC), KCR spoke about the need for a political force to bring in qualitative change.

He said if a beginning is made from Telangana and Hyderabad for the country's betterment and if the new agenda comes from here, the state would be proud.

In this context, KCR also spoke about the ongoing work on building the TRS office in the national capital.

He said what the country needs is an alternative and not a political front to bring some parties together to oust a party from power and replace it with another.

"This will be a process like how we achieved Telangana. What happens in this process, only the time will tell," he said.

Highlighting the transformation of Telangana in a short span of seven years, he said the state has become a role model for the entire country.

He also called for a debate on why the country, despite all the natural and human resources, is unable to achieve what Telangana has achieved in all sectors.

Lamenting that even after 75 years, the fruits of Independence have not reached the people, KCR called for a debate on why the country has failed to fulfil people's aspirations despite having all the resources at its disposal.

He also voiced concern over the growing communal disharmony in the country and urged people to ponder where would this lead the nation.

He asked how the country could bear abuse to the father of the nation, Mahatma Gandhi.

"This happens in no other country. We hear abuses for Gandhiji while his killer is worshipped," he said.

KCR also spoke about the dangers posed by communalism to the country. He referred to swords and guns being brandished in religious processions in Delhi and wondered which religion or Constitution allows this.

He warned that the politics of hijab and halal and boycott of shops run by people of one community will only bring destruction.

"There are 13 crore Indians working abroad and if those countries say you don't belong to our religion and get out, will this government give them jobs," he asked.

Slamming the BJP government at the Centre, he said it is indifferent to falling GDP, shutting down of industries, price rise and several other problems faced by the prople.

Instead, the BJP government uses issues like Pulwama, surgical strike and even a film like 'The Kashmir Files' for political gains, the TRS leader said.

He said even the Kashmiri Pandits themselves have told the government not to prick their healing wounds and instead of using them for political gains, do something for their welfare.