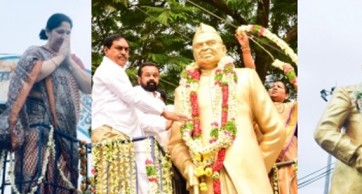 Chandrasekhar Rao recalled the services rendered by former Deputy Prime Minister and leader of the weaker sections Babu Jagjivan Ram who fought for India's Independence, casteless society and equality in the country.

KCR, as the Chief Minister is popularly known, said that the Telangana government is striving hard to root out the socio-economic disparities encountered by the Dalit Community in the state. Taking inspiration from Jagjivan Ram, the state government has launched the prestigious Dalit Bandhu scheme to uplift the poorer sections economically.

The CM said that the slew of Dalit empowerment programmes launched by the state government gave a boost to the self-confidence and socio-economic self respect to the Dalit communities.

Jagan Mohan Reddy also paid rich tributes to Jagjivan Ram. He said the late leader had dedicated his life for the people.

The Chief Minister said Jagjivan Ram's services as a Parliamentarian and Deputy Prime Minister will always be remembered.

In both the Telugu states, different programmes were organised to pay tributes to Jagjivan Ram.

Ministers garlanded the statue of the late leader and recalled his services to the nation.

Minister for panchayat raj E. Dayakar Rao offered floral tributes at the statue of Jagjivan Ram in Jangaon. He said that the Telangana government is working with inspiration from B.R. Ambedkar and Jagjivan Ram.